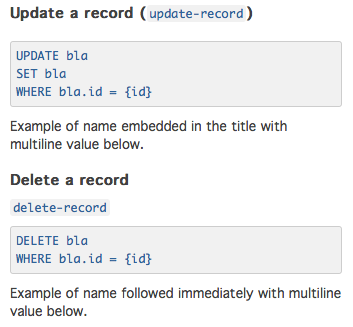 Have you ever just wanted to load multiline properties values into Java and sank in your seat at the choices available?  I had the exact same ‘sigh’ on a new lightweight project when I needed to store some database statements.  After quickly refusing to accept the usual suspects (Java string concatenation, XML bloat, properties files or JSon escape ugliness) I thought it shouldn’t be too hard to load from a Markdown file.  No frameworks, no more dependencies, just a few lines and simple rule for beautifully maintainable multiline properties.

And it really was just a few lines of code.  But like many such ideas it came together after some not so few lines and considerable simplification effort.  But in the end the MarkdownProperties helper handles various formats.

So there it is, barely 30 lines of real code (albeit Java8 compressed). Still, the basic principles are simple. We continue to buffer lines from the markdown file until a regular expression matches any code blocks. Then we simply cache the first code block as the name, otherwise we collect the code block as a value under the previously cached name.  That’s it.

As long as your Markdown adheres to paired code blocks for names and values of properties, you can be as expressive and rich in other Markdown formatting and documentation content around those properties. 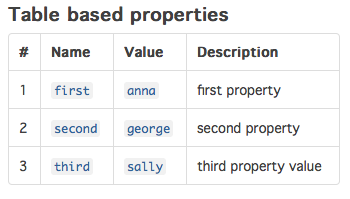 Here’s another example of a table in Markdown which contains your properties.  Again, the parser simply ignores everything that isn’t in a code block, pairing code blocks up into properties as it goes.

I’m sure you can think of many improvements and enhancements but even this is quite usable for loading Markdown resource files from the classpath that contains database statements or other documented properties values without littering your Java code.  The concept is easy to port.

Head on over to my GitHub research project for the working code and test class, including the full test Markdown I’ve used to verify it works.

"What makes me unique is my ability to abstract complexity from all the people and technical dimensions into simple reliable solutions."